Working with US tech to turn sugarcane bagasse into biofuel 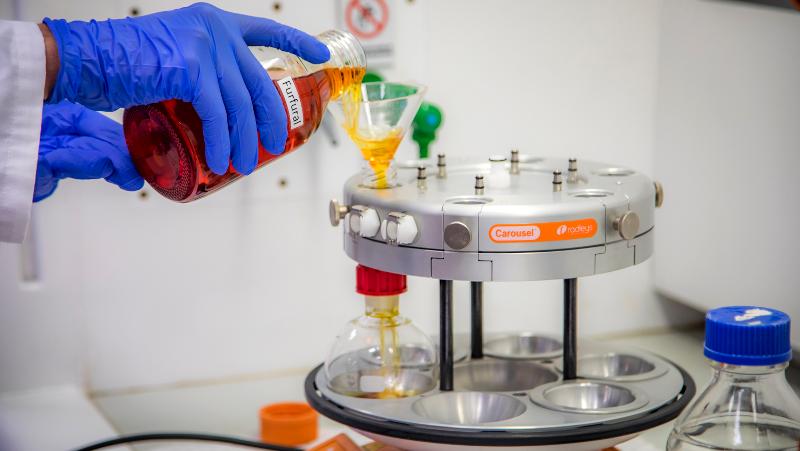 QUT is testing a novel technology developed by US company Mercurius Biorefining to convert biomass into jet and diesel fuels.

The project aims to optimise the processes of Mercurius’s patented REACH technology for efficiency and cost-effectiveness and help determine achievable yields and the quality of the fuel converted from sugarcane bagasse (fibrous residue left after juice extraction) and other biomass.

“Our technology is similar to industrial processing techniques already in use in the pulp and paper industry and in the petroleum industry, and so it can be more easily scaled and efficiently convert biomass into biofuels,” Mr Seck said.

“We are pleased to be working with QUT and furthering a collaboration that began about five years ago.

“QUT is looking at our technology at the laboratory level, examining our processes using sugarcane bagasse and other biomass material that you have in Queensland, and how our processes can best be scaled up to pilot plant testing.

“Our hope is that we would progress to construction and operation of a pilot plant by the end of this year, across sites in Mackay and Gladstone.”

“The Palaszczuk Government is leading Australia’s biofutures revolution through the Advance Queensland Biofutures 10-Year Roadmap and Action Plan and through supporting companies like Mercurius to choose Queensland,” he said.

“This project is another step towards achieving Queensland’s vision for a $1 billion sustainable, export-oriented biotechnology and bioproducts sector.”

“From the second stage condensation of platform chemicals we have produced litre quantities of the pre-cursor fuel product which have been sent to the Northern Oil Advanced Biofuels Pilot Plant near Gladstone,” Dr Rackemann said.

“There it undergoes the final hydrotreating step to produce diesel and jet fuels, which will be tested.

“The technology is designed to produce fuels that can be tailored for use and ready to drop straight in to jet engines and diesel vehicles.”

CTCB Director Professor Sagadevan Mundree said Mercurius’s technology could be potentially applied to any type of biomass, such as agricultural residues, which Queensland has in abundant supply.

“QUT is excited to be part of this validation and optimisation project to help advance the commercial reality of producing renewable fuels with this technology,” he said.