Pokemon Go is giving a glimpse of how gaming can keep drivers safer behind the wheel, according to QUT’s Dr Ronald Schroeter.

As part of his research, Dr Schroeter has been investigating the idea that augmented reality can create a stimulating driving experience and has the potential to replace the urge for risk-taking behaviours, especially in young drivers.

He said the sudden and massive hit of Pokemon Go had turned augmented reality mainstream.

“For years researchers have been trying to raise the public conscious of augmented reality, the idea that you overlay a digital world on top of a real world.

“But within just a few days Pokemon Go has shown the world how augmented reality works, providing us with a better language to explain our research.”

“Augmented Reality gaming via smartphones is obviously not ideal, especially from a driver behaviour perspective. However, once you use more integrated technologies such as head up or windscreen displays, we think gaming and augmented reality could be used to add elements into the real world that help drivers maintain their concentration.

And the big ideas don’t stop there. 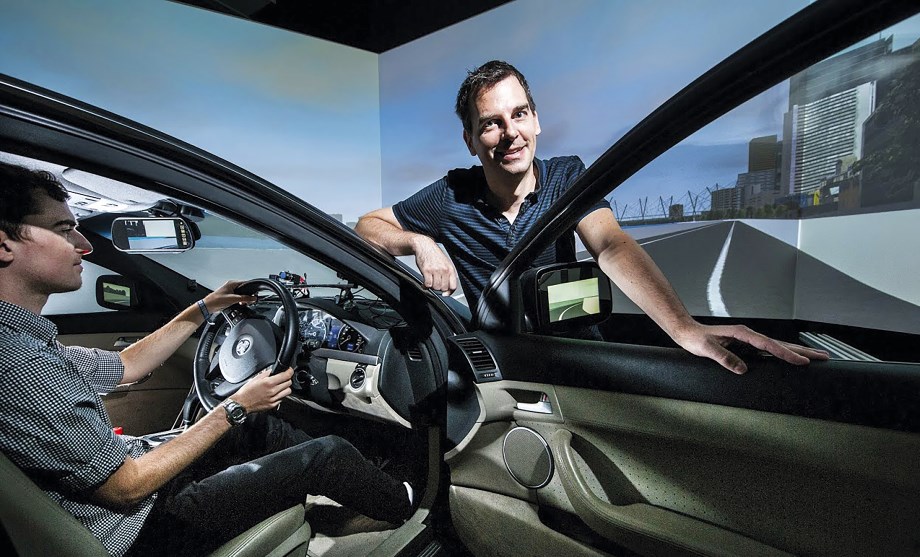 Dr Schroeter said augmented reality could also be used in semi-autonomous vehicles to help drivers engage with their surrounds.

“There’s a lot of talk around autonomous cars in general, but it will take decades for fully automated cars to fully penetrate the market. However, semi-autonomous vehicles are very much a reality.

“We have recently seen the first deadly crash of a Tesla car, which collided with a truck in autopilot mode, which highlights the difficulty of making the monitoring of a semi-automated system appealing to the driver.

“A warning message telling the driver that they must monitor the car at all times at the start of the journey is not really the best solution from a human perspective.

“This is where QUT’s research is very relevant, and as the car becomes more automated, the design space for what’s feasible in terms of real world implementations broadens this design space even further.

“If the car is aware of its surrounding reality and has a certain level of intelligence of its own, we can design more augmented reality applications.

“One could hypothesise that the driver of the Tesla in AutoPilot mode might have had a better chance seeing the truck if they had been scanning the environment, for example looking for Pikachu projected into the driving scene or reality through the windscreen display.

“This is how our research is leading the way in using gaming techniques and augmented reality to make drivers in the future safer.”