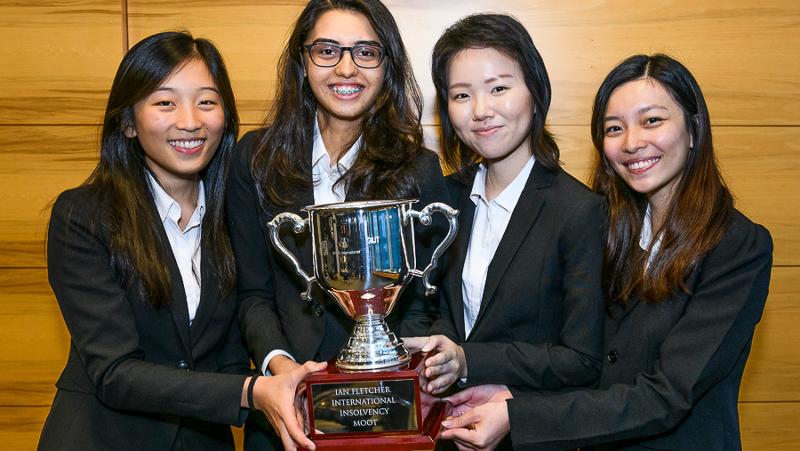 The Moot provided the opportunity for universities to participate in a competition dealing with international insolvency and restructuring laws. The challenging Moot Problem required students to apply the Model Law on Recognition of Insolvency-Related Judgments promulgated by the United Nations on International trade Law in 2018. As yet, no jurisdiction has adopted this Model Law, so the Moot provided a unique opportunity for the large and diverse range of moot judges to consider its potential implications for their national laws.

Following the preliminary rounds, teams appeared before judicial officers from common law and civil law countries around the globe for the Semi-final and Final Rounds.

QUT Adjunct Professor Rosalind Mason, the Inaugural Moot Coordinator, says the moot was a great success. “It was a privilege to coordinate such a prestigious international competition. Lord Justice David Richards spoke on behalf of the international panels of judges on the high quality of student preparation and advocacy.”

Singapore Management University took out the coveted title of Winner of the Fletcher Moot. Runner up was awarded to the OP Jindal University, India. The Queensland University of Technology was one of the eight qualifying teams, who hailed from Australia, Singapore, India, Serbia, The Netherlands, England and Canada, and appeared before benches of specialist lawyers and academics in the preliminary rounds.

The Fletcher Moot is named in honour of the late Emeritus Professor Ian Fletcher QC (hc), a world-renowned scholar and author in international insolvency law. The Foundation Sponsors for the Competition are INSOL International, the International Insolvency Institute and Queensland University of Technology.