For the first time in human history, we have the largest population of young people, but they remain an untapped resource for peace building efforts both locally and globally. QUT world-first extensive study into youth-led peacebuilding will investigate the role youth play in building inclusive and durable peace.

“What can the largest generation on the planet deliver as positive change and how can we help make that happen?” – Dr Helen Berents

QUT Senior Lecturer Dr Helen Berents, is a recipient of the 2020 Australian Research Council (ARC) Discovery Early Career Researcher Award, otherwise known as DECRA. This award will fund a three-year study into youth-led peacebuilding in three post-conflict contexts. It will investigate the roles youth play in building inclusive and durable peace at local and international levels, providing insights into best practice for including youth in peace and security policies. 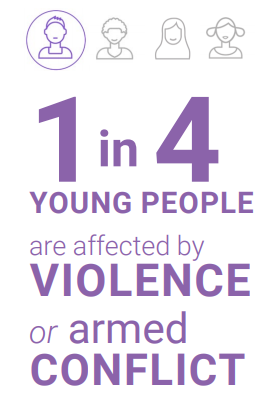 “People talk about war like no one is in it, like no one is there afterwards trying to pick up the pieces. I want that conversation to change. When Syria is mentioned for example, we need to also think about what it’s like for young people to live day-to-day in Aleppo under siege. What could it be like for them after it is over?”

The United Nations Security Council Resolution 2250 announced in 2015 is considered ground-breaking and will play a key role in the UN Sustainable Development Goals 2030 Agenda. The resolution marks the first time the UN has recognised young people as positive contributors to peace. Member states and other parties must now meaningfully include young people in their responses to conflict and security plans.

Prior to the UN resolution, Helen says youth have traditionally been viewed as a problem or a risk and there was nothing in place to ensure youth representation at policy tables.  “We need to recognise the contributions youth are already making but give them the space and tools to step in, collaborate, and consult with our established institutions of power at all levels, local, national and international.”

Despite not ‘being given a seat at the table’ young peacekeepers have always been responding to issues within their own contexts, but Helen asks, “What does this new international attention mean for their future capacity to do their job? What opportunities for peace building are yet to be realised? That’s what I am going to find out.”

As part of her project, Helen will travel to Colombia, Philippines, and Sri Lanka spending five to six weeks in each country undertaking qualitative research with key youth leaders and organisations. “Getting to go and chat to the young people, hearing their vision and what they are doing to achieve that despite the barriers they face is energising. If I can play a role in helping them be heard, that would be very rewarding.”

All three countries have experienced major conflict and a peace agreement within the last decade. But just because there is a peace agreement in place, doesn’t mean everyone is at peace. Colombia, for example, has had one of the longest running conflicts in the western hemisphere that started in the 1960’s. In 2016 their government signed a peace agreement with the largest non-state group FARC to end the conflict, but it started this unique period where there isn’t peace or war, “everything is uncertain.”

As part of a recent research project, Helen spoke to a young peace-worker from West Africa who had been working for years to provide access to health services, advocating for education on human rights and reproductive health, particularly for young women. After many years of advocacy, he now has seats on local committees and places himself in those existing places of power. He said to her, “this paper [UN resolution 2250], means they have to listen to me, I get a foot in the door.”

So how we can better account for and include young people in peace building and peace and security policy? How can peace building be made more youth inclusive, how can they meaningfully become part of the conversation?

It’s about participation and partnership with youth, as opposed to creating things without consultation. Some countries do consult with youth with great results. Helen says that some European and Nordic countries already have a good history of youth partnership. Rwanda post-genocide made seats designated for both youth and women in parliament, “they needed to– 70% of the population was under the age of 25.”

When our mechanisms of power acknowledge and encourage contributions from youth, more effective solutions can be created. Whether that is a global conversation about climate justice or a group in a very specific context, like youth groups advocating for safe access to schools or lighting in communities to make places safer after dark.

“Young people aren’t defeatist, they are pragmatists. They understand the reality of the situation, but they aren’t afraid to hope. If we don’t have hope, what’s left?” There are many concerns right now with different events happening around the world, but Helen says not to give up hope.

“Greta Thunberg being on the cover of TIME magazine as Person of the Year tells us that the conversation is shifting. There is a space being opened for young people. It’s important not to give up. But we need to make sure that the participation is meaningful and genuine rather than tokenistic.”

Helen’s interest in the field first started when her family moved to live in Venezuela as expats from when she was 10-14 years old. “It was the first time I’d really seen inequality. We were very well off as expats and the contrast was striking,” It prompted her to ask the questions, “What does it mean to live in a world with these kinds of differences? What does it mean for the children who were my age who didn’t have the opportunities I had? And most importantly, why does this inequality exist?”

At university Helen was able to complete independent research projects, “I read stories about young people surviving war. I realised that people weren’t talking about or taking seriously what young people were doing to help rebuild their communities, so I thought I might.”

Helen hopes that her research will allow for continued conversations with government, policymakers, and other organisations both youth-led and non-youth led. Her workshops that bring together academics with policymakers and civil society representatives have already been successful.

“If I can find mechanisms that push in particular ways that will open up spaces to enable recognition of young people's work that I know is going on but is so rarely recognised in policy spaces and government spaces, that’s what I’m going to do.”

You can stay up to date on Helen’s project by visiting her website.