Compliance with sun protective behaviours is low among all age groups. IHBI researchers
aim to change that as part of a multi-faceted approach with a host of collaborators that
will consider design and education as well as behaviour.

IHBI’s Louise Baldwin is developing a skin cancer prevention program that takes into account the need to provide an environment that supports Australians to be ‘sun protective’.
She understands that sports clubs, schools and workplaces often have limited shade at facilities or limited access to resources and funding.

Her research involves collaborating with urban and regional planners, education bodies and workplace health and safety officials. Partners include the Design Institute of Australia, ensuring sun protection is an important consideration in building and landscape design rather than an afterthought.

‘A long-term aim of our research is to influence the building standards in Australia to incorporate effective sun protective design elements,’ Ms Baldwin says.

Apparel is another important consideration, with design options in popular sports such as netball exposing significant areas of skin and increasing skin cancer risk. Protecting the skin with clothing that extends the sleeve to the elbow and shorts to the knee has been shown to reduce mole count, a risk factor for skin cancer, in pre-schoolers in tropical Queensland.

QUT colleagues from the Faculty of Health and Creative Industries will provide important insights in apparel design and health behaviours as part of this aspect of the research.

Ms Baldwin says ineffective use and over-reliance on sunscreen is prevalent and too many people become sunburnt because of inadequate preparation with protective clothing, hats and shade.

Fabric choice is important, she says. ‘Look for close weave fabrics in slightly darker colours such as reds, blues and greens. Hold a hat to the light. If you can see light through the weave, it means ultraviolet (UV) rays can get through as well.’

UV radiation that causes skin cancer is different to the heat rays from the sun, also called infrared rays. Temperature does not affect UV rays so exposure and risk are not reduced in winter. The UV radiation is a Group 1 carcinogen, the same as tobacco and asbestos.

Skin cancer is the most common cancer in Australia, with at least two-thirds of people diagnosed before the age of 70 years. More than 13 000 people in Australia are diagnosed each year.
It cost $137 million to the Medicare system in 2014 and diagnosis accounts for immeasurable costs such as psychological stress, time off work, disfigurement, scarring and the risk of recurrence.

‘This is a largely preventable cancer and it has a huge burden on Australian society. We know how to prevent skin cancer and detect it early. Prevention can be effective with simple steps
of individual and environmental behaviours. ‘We can’t tell Australians to be sun protective without creating environments that support the behaviours. It’s is not just research. It’s changing how we live.’

An online portal will be developed as a repository for innovative sun protective designs and resources for best practice that consider both apparel and the built environment. Behavioural change will be measured using an evaluation and monitoring tool.

“We hope we can ultimately have a long-lasting and positive impact on preventing skin cancer and saving people from illness, treatment, stress and disfigurement,’ Ms Baldwin says.

LOUISE BALDWIN’S MOTIVATION FOR SKIN CANCER RESEARCH:
‘Skin cancer prevention is a major focus of my career. For almost 25 years I’ve been privileged to have led or been involved with significant skin cancer prevention work across Queensland, including some national roles. Often our passion for work is driven by tragedy. My own father was a victim of melanoma and he was taken far too young. Once I was old enough to realise that the cancer which took my father was preventable or detectable early, that drove me to do something and prevent further tragedy from this all-too-common cancer. We’ve had some huge improvements in sun protection but we still have a long way to go. At QUT, we’re hoping to lead the way and prevent more unnecessary tragedies from skin cancer.’ 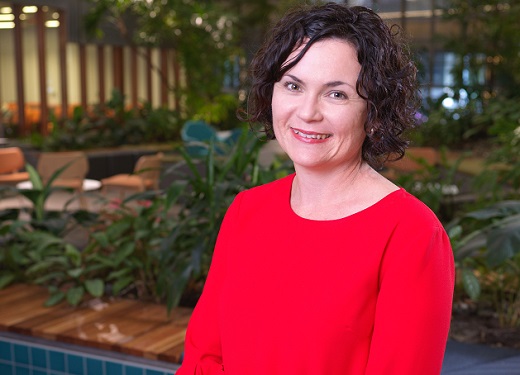