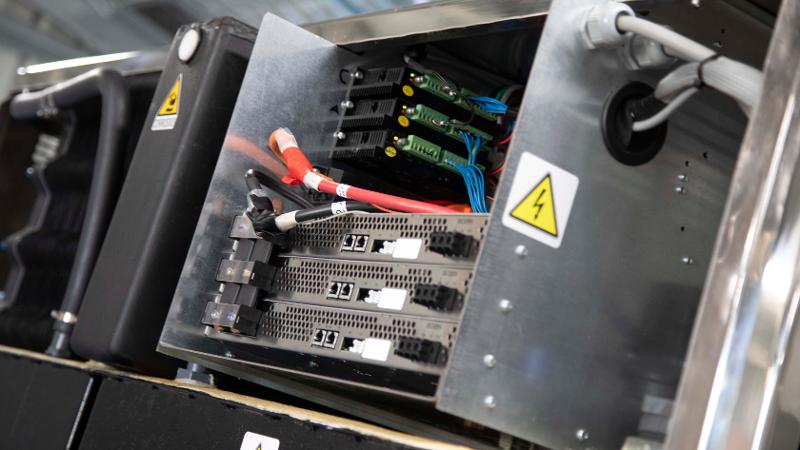 A vanadium flow battery -  the first of its kind in Australia - has just been installed at the National Battery Testing Centre (NBTC), a flagship project of the Future Battery Industries CRC. The commissioning and testing of the battery is a collaboration between QUT, research partners and government.

The Future Battery Industries CRC brings together about 50 partners, including industry participants, Federal and State Government stakeholders, academics and researchers and broader participants and supporters from across related sectors.

“There are many advantages over traditional battery energy storage systems such as 100 per cent capacity retention, a lifetime of around 25 years and ease of scalability. As it stores energy in liquid form, the capacity of the battery can be increased by simply increasing the storage tank volume.“

“This prototype allows researchers to test and develop safety standards for vanadium flow batteries, and helps bring the technology to the Australian market.”

“Due to their inherent advantages in large-scale energy storage, vanadium flow batteries have the potential to service the growing need for grid-scale energy storage solutions in Australia, supporting and stabilising the national electricity grid as renewable energy generators continue to roll out,” Professor Talbot said.

The 30kWhr battery was provided by Multicom Resources Limited in partnership with StorEn Technologies Inc. (based in the US) as part of the Australian Renewable Energy Agency (ARENA) funded H2Xport project at QUT for use in their renewable hydrogen plant.

QUT alumni and Executive Director of Multicom Resources Limited, Nathan Cammerman said it was a privilege to be working with world class researchers on these cutting-edge technology developments.

“Multicom and our subsidiary company Freedom Energy is excited to be part of the groundbreaking work being undertaken by the NBTC and look forward to this battery forming part of the H2Xport microgrid project at QUT,” Mr Cammerman said.