Leaving BrisVegas (Brisbane) just got a whole lot easier thanks to a world-first Digital Departure Card developed in partnership between QUT students and staff, a Brisbane entrepreneur and Brisbane Airport Corporation (BAC).

The card involves passengers entering and saving personal information for the departure card onto their mobile device prior to their arrival at the airport.

The information is converted into a QR code that is scanned and printed at kiosks in the International Terminal and then signed by the passenger and collected by Customs officers during the normal departure process.

"All they have to do is download the BNE's mobile App, which many travellers will already have done, and key in the information on their smart phone," he said.

"It's quick, easy and efficient and it overcomes one of the hassles detected by QUT creative industries students tasked with identifying a way in which the passenger experience could be improved."

Professor Dreiling said filling out arrival and departure cards stood out as being a process that some people struggled with, particularly those who didn't speak or read English.

"QUT students and staff were keen to take on this project and develop a solution to prototype stage," he said.

"This ultimately involved students from the Business and Science and Engineering faculties coming onboard at both graduate and undergraduate levels to develop an electronic prototype which was presented to BAC .

"They completed a risk assessment strategy around the new innovation, too .

"Filling in data for the arrival or departure cards on the BAC app in advance rather than filling it in on the cards at the airport makes the process easy whether someone is a frequent international flyer or a sometime traveler, regardless of age or language," Professor Dreiling said.

He said QUT was extremely appreciative of the opportunity to design and put their prototype forward to BAC.

"QUT has a long-standing research and development relationship with BAC and it's one that we value highly," Professor Dreiling said.

He said all up the project ran over two semesters and involved students from Creative Industries (Interactive and Visual Design), as well as students from across various disciplines in Business and Science and Engineering to build businesses cases, marketing plans and technical prototypes.

Professor Dreiling said the experience had been a very rewarding one for staff and students involved as it went to the heart of QUT's teaching philosophy.

"Our students came up with an innovative idea and incubated it for Kernhard to develop for BAC. This is a new service that makes a real difference to everyone departing Brisbane's international airport," Professor Dreiling said.

Brisbane-based entrepreneur Stephan Clemens of Kernhard Pty Ltd created a smart and production-ready kiosk solution when mainstream suppliers could not.

"This is just the start! Kernhard developed a range of products to increase passenger satisfaction and to improve processes for airports, airlines and shipping worldwide," he said.

"Kernhard received fantastic support from BAC. It provided an environment which gave Kernhard all options to succeed. Perfect conditions for a start-up.

"Personally, this is like a dream come true. This project has enabled me to take an idea and turn it into a real-world solution.

"As a passionate glider pilot with entrepreneurial spirit this catapults me right into the aviation industry," Mr Clemens, a software architect and developer, said.

As it is the first of its kind in Australia, the Digital Departure Card initiative is now a prototype allowing performance measurement and the ability to refine the design for future large scale releases.

Mr Clemens said ultimately it was hoped the Digital Departure Card kiosks would be found at airports across the country and internationally. 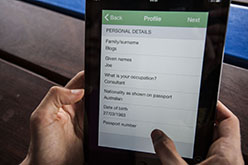 QUT students and staff have been behind the development of the new Digital Departure Card being trialed at Brisbane International Airport. 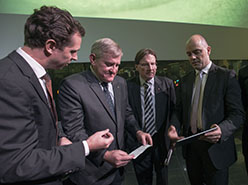