It may be petite, but Pepper carries the future of robotics on its narrow shoulders.

QUT is Australia’s first university to use Pepper specifically for a social robotics research platform, complementing the State Government’s strategy to explore the potential for humanoid robots.

Created by SoftBank Robotics, Pepper is the world’s first personal humanoid robot that can recognise emotions. It also mimics human behaviours such as following the conversation around it by looking at whomever is talking.

“The degree to which social robots could change society is the basis of our new research program,” said Ms Ward, from the Science and Engineering Faculty and Australian Centre for Robotic Vision.

“Pepper is probably the most ‘personable’ robot on the market in terms of its perceived emotional intelligence, which makes it a fantastic platform to investigate the suitability of social robots, which is still a very new field.

“What we learn from human-computer interactions with Pepper will inform the next generation of service robots, building an effective social component into their task-oriented programming.”

Ms Ward said the funding would allow her team to explore the different applications of these robots across a range of settings and conditions, and their effectiveness in each.

“While a social robot in every home is probably a long way off for society, I see a place for social robots supporting human staff in every hospital, aged care facility and classroom, as companions and helpers – and there are no doubt many more settings we haven’t even considered yet.

“Would a shy child in a classroom be more willing to ask a question of the robot rather than the class? Would a nursing home resident enjoy reminiscing about their past to a robot? Would a hospital patient feel comfortable chatting with a robot as it tidied their room?” Ms Ward said.

Ms Ward’s team will also work with STSA to improve Pepper’s vision and navigation systems, making the robot even more versatile in the future.

QUT’s use of Pepper will also have a strong student focus. The robot will spend much of its time interacting with students and the public at The Cube, the university’s signature STEM engagement space, and fielding student enquiries.

QUT students and visiting high school students will also be able to experiment with Pepper, coding programs for it to run.

QUT’s innovation and commercialisation arm, qutbluebox, is separately partnering with the Queensland Government and STSA to deliver a Robotics Accelerator program at The Precinct, Queensland’s new innovation and startup centre in Fortitude Valley.

“This program will fast-track the development of the next generation of startup founders to drive forward robotics and other hardware solutions across a range of industries,” he said. 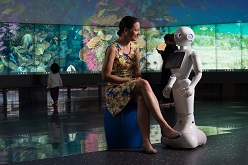