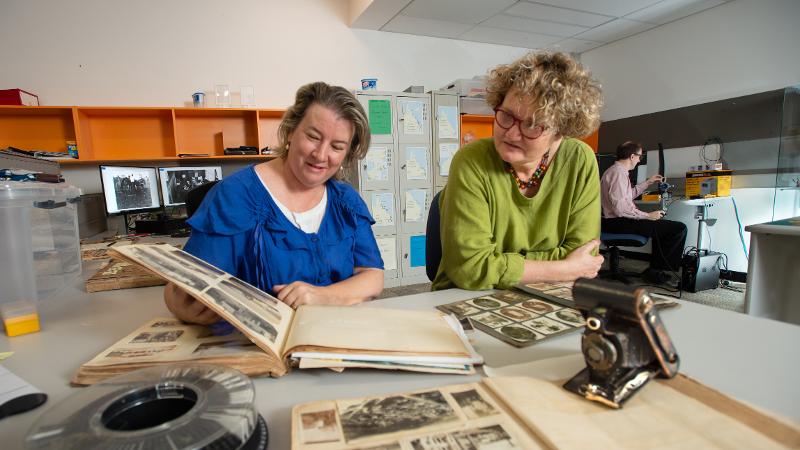 More than 60,000 photos covering nearly a century of Queensland history have been donated to QUT to be preserved as part of the QUT Digital Collections – a publicly accessible time capsule that is helping safe-keep the state’s heritage for future generations.

Brisbane bank teller Jack Bain was a prolific photographer of buildings, bridges and landscapes across Queensland from the 1920s through to the 1970s, with his daughter Cynthia O’Gorman also capturing places and subjects around the state from the 1960s to early 2000s.

Their family print albums and slide boxes contained more than 100,000 images taken across Queensland, around Australia and overseas.

QUT alumnus and education lecturer Dr Lyndal O’Gorman inherited the photos after her grandfather and mother passed away, and decided to donate them to the QUT Digital Collections (part of the QUT Library).

So far, more than 500 of the best images have been scanned into the new Bain/O’Gorman Collection – with detailed notes recording their geographic and historic significance – thanks to the patient work of the university’s digital collections librarian, Jill Rogers.

The digitised images can be freely accessed by anyone around the world and downloaded and shared.

“I have thousands more photos to go through, so the collection will grow over time and include more Queensland places – I don’t think there’s anywhere in the state they didn’t go!” Ms Rogers said.

Dr O’Gorman is a senior lecturer and researcher in early childhood education with QUT’s School of Early Childhood and Inclusive Education, and completed her teaching degree, Masters, and PhD through QUT. She taught in primary schools in Brisbane and far north Queensland before becoming an academic.

Art teaching and education for sustainability are her specialty areas.

“Photography is a really great example of how you can teach people about the world and how important it is to protect – and record – the world around us,” said Dr O’Gorman, who is also a keen photographer.

“I donated these photos so that they could be looked after and preserved … and I know my Mum and Grandad would have been thrilled to see how much they are being enjoyed by other people.

“The idea that people from anywhere in the world could enjoy his photos would have been quite mind-blowing for my grandad.

“I think photos like these bring back people’s memories of their childhood and their own families – they bring a lot of happiness.”

Dr O’Gorman said her grandfather was a bank teller who worked in the ANZ building [formerly the Bank of Australasia] on the corner of Queen and Creek Streets in Brisbane’s CBD for many years, as well as other Bank of Australasia branches around south-east Queensland.

“He worked in a bank all his life – he didn’t like it, he didn’t enjoy it, but it was a reliable job. I think photography was an escape for him,” she said.

“He was always interested in technology and machines and in what cameras and photography could do and he was interested in documenting buildings and architecture.

“My mum picked up his interest in photography and she loved taking photos of nature and landscapes and our family. She was a fulltime mum and a seamstress and a craftsperson and very creative … I think photography was a bit of an escape for her too.”

Ms Rogers said the Bain/O’Gorman Collection could be browsed by the public, like the rest of the QUT Digital Collections.

“The photos really are incredible – I have so many favourites … Jack and a friend sitting on their motorbikes on the Harlin Road Bridge near Ipswich in the 1920s, people in old bathing costumes at Kirra Beach in the 1920s, and aquaplaning off South Molle Island in the 1950s, just to name a few,” she said.

“And there are moments of history captured, like the Brisbane CBD decorated for Queen Elizabeth’s first visit to Brisbane in 1954.

“Jack and Isabel Bain also travelled around the world in 1966 for nine months after he retired from the bank, so the donated slides also include photos taken in countries including Switzerland, Canada, Egypt, Germany and the UK.”

The QUT Digital Collections is a public repository that was established in 2012 by the QUT Library and contains thousands of images, publications, documents and videos.