UniSport, the governing body for university sport announced an additional three categories to their annual awards suite for the 2019 annum, with 79 nominations received across the National member institutions.

QUT Athletics Club President Casey Sims was awarded the Community Leadership Award for her outstanding contributions to the Athletics Club.

Athletics members participate in the National University Championships on an annual basis whilst also supporting athletes and members within State, National, and World athletics environments.

Sims has been instrumental in developing the club’s growth to reach over 130 members whilst also delivering weekly social athletics programs that consolidate the pathway for members from recreation to performance-based environments.

Sims extended her gratitude to the additional Committee members involved within the QUT Athletics Club. 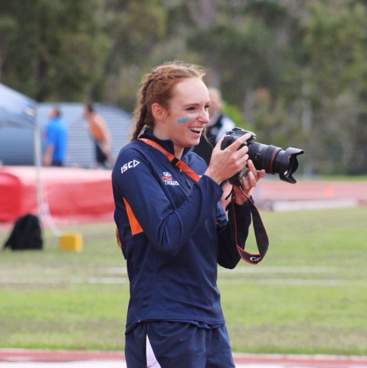 ‘I am only one member of a very large membership group, and I would like to acknowledge every QUT Tiger for their role in building our club on and off the field.

‘I’d also like to thank the QUT Athletics Club Committee for their hard work behind the scenes, Sims said.

The QUT Athletics Club is now planning the future with some exciting initiatives in motion that will continue to build the club’s membership base.

With the continued assistance of Sims, the club plans for continued collaboration with both QUT Sport and Queensland Athletics to deliver high quality, supportive, competitive and fun events with a focus of bringing more people into the athletics community.

Most Outstanding Performance by an Indigenous Athlete – Jemma Mi Mi

Queensland Firebirds player Jemma Mi Mi received an award for the Most Outstanding Performance by an Indigenous Athlete for her performances within the Super Netball League.

Jemma Mi Mi said she is hopeful that young Indigenous athletes are inspired to continue striving in sport.

‘I’m very grateful to receive the award, and I hope it encourages young Indigenous sportspeople to continue striving and participating in sport. Mi Mi is the only Indigenous athlete to compete in the Super Netball League and has also been named as a member of Netball Australia’s Development Squad where both the 2022 Commonwealth Games and 2023 Netball World Cup players will be selected.

This year is Mi Mi’s fourth season with the Firebirds and her goal is to win a Premiership with her team in seasons to come.

Congratulations to both Casey Sims and Jemma Mi Mi for their respective awards.