QUT Netball celebrated Aboriginal and Torres Strait Island communities at the inaugural Indigenous Round of the HART Sapphire Series held on Saturday the 29th of June.

Community & Elite Sport Coordinator and Head Coach of the Sapphire Team Paula Stuart said it was an important round which resonated with QUT’s strategic focus.

‘We’re focused on developing the sport with an inclusive approach, particularly in ensuring opportunities for Indigenous players and coaches,

‘We’re very proud of the culture we’re developing in this inaugural year as a Sapphire team, and this was echoed at the Indigenous Round on Saturday,’ she said.

QUT’s Elder-in-Residence, Mr. Gregory Egert and Pro-Vice Chancellor (Indigenous Strategy) Angela Barney-Leitch joined the Sapphire team, offering words of encouragement before the match and cheering the team on courtside in a competitive round of games against the Brisbane South Wildcats. 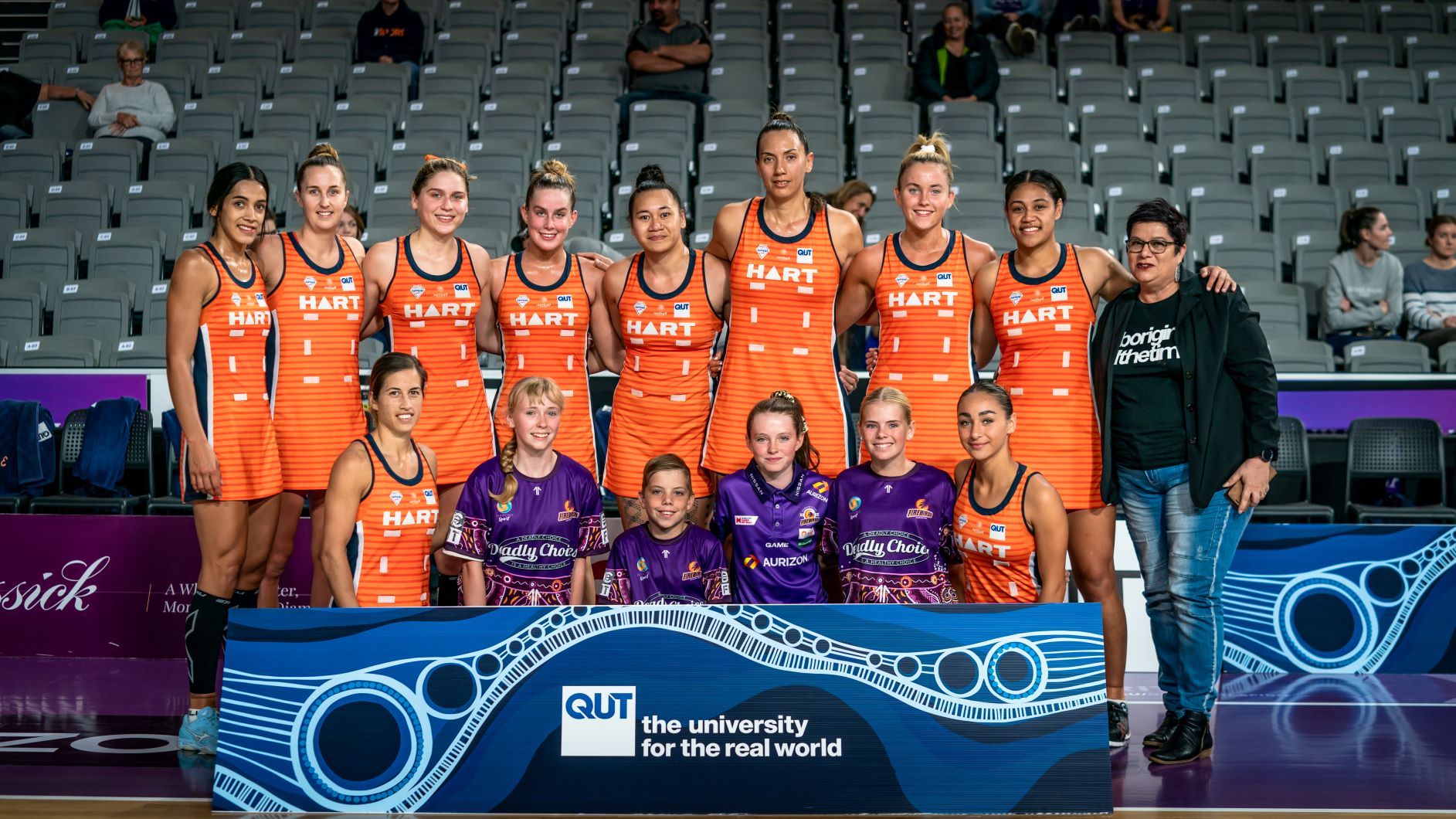 QUT defeated the Wildcats in the Sapphire League scoring 57 points, 16 points ahead of the cats’ 41.

In the Ruby league, QUT and the Wildcats drew, evenly scoring 53 points a piece in a closely fought game.

‘It’s such a proud round for me, and it’s great to see Indigenous awareness is gaining momentum in our sport,

‘This round showcased our culture, history and of course our talent.

‘QUT are really striving to meet our community’s expectations from the stories passed onto the players prior to the games, the artwork and everything behind the scenes that has gone into developing our teams, Dodd said.

QUT Biomedical Science student and netball player Ella Blackman contested Saturday’s round and said the weekend’s games were up there with the best played so far this season.

‘We were able to play one of the best games this season on the weekend, and the words of wisdom passed on from QUT’s Elder-in-Residence definitely inspired us, Blackman said. Mr. Egert also spoke to the QUT teams about the importance of the Indigenous artwork by artist Keisha Leon, displayed throughout Nissan Arena.

‘The players were all interested to learn about the artwork which was displayed courtside at the weekend’s round, and learned about country, knowledge and connections, the meaning behind the artwork,’ Stuart said.

‘I am an Indigenous Australian, a Goemulayg girl from the tribe of Panay, Mabuyag Island and also of the Aidth Koedal tribe from Saibai Island in the Torres Strait,

‘Speaking to my team and sharing my culture this week made me feel special, respected and loved.

‘It has been a time to celebrate who I am, to stand up and be noticed for everything that is great about being an Indigenous Australian,’ Babia said.

Both QUT Sapphire and Ruby teams will face off against USC Thunder this Saturday, June 5th at Nissan Arena, with the QUT Sapphire team hoping to maintain their spot at third in the ladder.