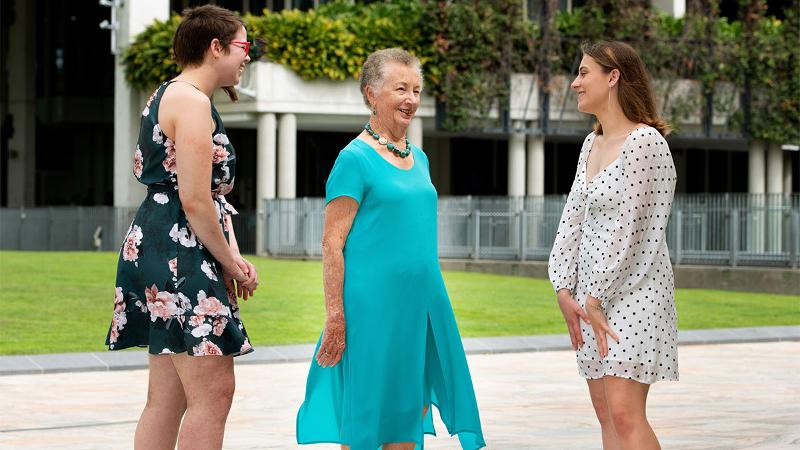 QUT donor Dr Laurie Cowled’s story is one of determination – a country girl who has dedicated her life to supporting young women from regional and rural Australia.

Laurie grew up on a blink-and-you-miss it town, Bethungra in NSW. While as a child she wanted to be a ballerina, an artist, and an actor, Laurie grew up in the years of the Great Depression – a time when no one in her country town was able to help her reach her life aspirations. So, at sixteen years old she started a career in banking where she worked for the next 35 years.

In 2007, Laurie founded the Cowled Foundation to foster the education of gifted, underprivileged and disadvantaged young women from regional and rural Australian communities. Through her generosity, Laurie established the Cowled Gift at QUT. She has since provided over 100 scholarships to country women, allowing them the opportunity to study at QUT and take the skills they gain back to their home towns.

One of those recipients is QUT alumnus and 2011 and 2012 Dr Laurie Cowled scholarship recipient, Tracy Thelander. Tracy grew up on North Stradbroke Island and recently shared the impact of her scholarship at an event with fellow recipients and Laurie in August.

“University was a foreign term on the Island. I was one of the first people from Straddie to attend university,” shared Tracy.

“[It] was a feat that I did not take lightly. I wasn’t only representing myself and my family, I was also representing my community. QUT was my first big step as an adult, moving out of home, working part-time, juggling all the social, work, and study aspects of my life.”

Tracy described the experience as being overwhelming.

“It was easy to feel alone at university, as an Indigenous woman trying to navigate the hundreds of people who were the epitome of business acumen and confidence. However, receiving the scholarship allowed me to see that I had support all around me.

“It opened up doors for me, it gave me the confidence to seek more help and gave me that final push to the end of my degree.”

Tracy said her success was the start of a ripple effect throughout her Stradbroke Island community.

“People from the Island saw that I was successful, that I graduated university and we celebrated that. It allowed me to become a role model for the younger generation moving through school and the university life.”

She is now a CPA accountant and Finance Manager for PricewaterhouseCoopers Indigenous Consulting.

Laurie has shared Tracy’s journey and the legacy of the Cowled Gift in a recently published biography, ‘A Joyous Addiction’, written by Michael Taylor.

“The joy I get from being able to support students, such as these young women, gives me great pleasure. Getting to know them, and finding out what they want to do once they graduate enlivens my days,” said Laurie.

The book was launched at a special scholarship acknowledgment event at QUT. Many of Laurie’s current and former scholarship recipients were there to celebrate the joyous occasion and thank Laurie again for her incredible generosity.

The QUT Learning Potential Fund supports students experiencing financial hardship to attend and remain at university. Each year, more than 2000 students benefit from the generosity of donors.

QUT is dedicated to facilitating the success of all students, regardless of background. The university underwrites all administrative costs and matches each gift dollar-for-dollar – doubling your impact and directly supporting students doing it tough. 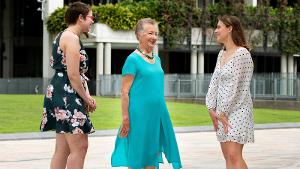 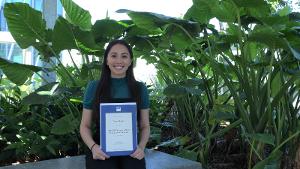