The race to save our ocean Climate change is plunging the health of our oceans into rapid decline. Launched in 2019, Live Ocean is a New Zealand organisation with a focus on restoring and protecting the blue planet. CEO of Live Ocean and QUT alumnus, Sally Paterson, explains the ‘ocean opportunity’ in the race to save our oceans.

We all love the Big Blue, especially those of us lucky to live near it. It is quite literally the life support system of the planet. In Aotearoa (New Zealand), we are 93% ocean and responsible for over four million square kilometres of marine realm.

Despite the urgency to improve the health of our planet, the health of the ocean is a glaring omission in both public and government discourse and is not well supported by the philanthropic sector.

The health of our ocean is one of the most serious issues of our time. It faces a multitude of stressors, climate change, pollution and over-fishing. For too long we thought it was too big to fail, that we could take out and put in what we like. The science is now clear: the ocean is in serious trouble.

Live Ocean’s founders, Peter Burling and Blair Tuke, are world champion sailors. It was after they finished the 2017/18 Ocean Race that they realised the precarious future of our oceans. Through the global platform of sport, we aim to bring people around these issues - most notably through our Race for the Future partnership with the New Zealand SailGP team. Believing sport has the power to change the world, SailGP’s ambition is to be the world’s most sustainable and purpose-driven global sports and entertainment platform.

What continues to drive us at Live Ocean is the size of the opportunity being missed.

As a society, one of the best things we can do is to educate ourselves about the challenges that face our oceans, and support actions to reduce our impact. Some great resources include:

There is an outsized opportunity to contribute globally to the health of the planet through our oceans. The race for a live ocean is on. And the platform of sport can take this to the world stage. Let's go! 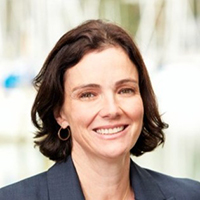 Sally is the CEO at Live Ocean. Her passion and interest in the for-purpose and philanthropic sector has been honed over the past decade, working for a range of organisations where she saw the power of sports people in raising awareness of environmental issues. Her interest in the sector was further enhanced by her studies at the Australian School of Non-profit and Philanthropic Studies (ACPNS) at QUT where she completed a Graduate Certificate in Business (Philanthropy and Non-profit Studies).

Connect with Sally on LinkedIn