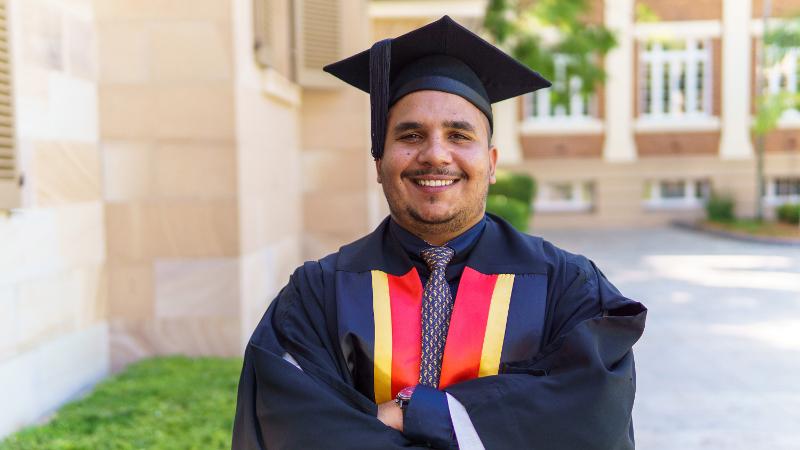 It's been an amazing six years for Joel Murgha ... the 24-year-old Gunggandji man from Yarrabah has completed a QUT law degree, been admitted as a lawyer, secured his perfect job, and become the dad of two young boys.

Mr Murgha graduated from QUT with a Bachelor of Laws (Honours) in 2020 and a Graduate Diploma in Legal Practice in 2021, and is now a solicitor with prominent Indigenous law firm Terri Janke and Company, where he specialises in Indigenous cultural and intellectual property law.

He is based in Cairns, where he lives with his partner Sonjah and their three-year-old and 11-month-old sons.

His admission ceremony at the Cairns Supreme Court at the end of 2021 attracted a huge turnout of supportive family and friends from his home community of Yarrabah, which is 50km south-east of Cairns and has a population of around 3000 people.

“It’s been an amazing six years,” he said.

“I didn’t think I’d already be working in my perfect job so soon after uni and getting admitted as a lawyer.

“I’d followed Terri Janke on LinkedIn and she posted the job online. Her firm has such an excellent reputation across the country and internationally when it comes to protecting Indigenous cultural and intellectual property, so I thought I’d apply – and I got the job.

“I work with clients all over the country, ranging from artists and not-for-profit organisations to government departments.

“It is rewarding and it’s something really different – you’re looking at ways you can make the law better and where there are current gaps in the law.

“It’s important for Aboriginal and Torres Strait Islander people to know the value of our knowledge and to make sure that if we are giving out that knowledge we benefit from it. In the past, we have given that knowledge without getting anything in return.

“We are now seeing more and more people want to learn from Indigenous knowledge, especially because of the way our culture has always focused on the land and the environment and sustainability … with global warming, more people want to incorporate traditional knowledge to build a sustainable world.”

Mr Murgha’s education journey saw him move away from Yarrabah at the age of 12 to go to boarding school in Townsville and graduate from the Cathedral School.

“After I finished school, I got into QUT and moved to Brisbane,” he said.

“I had QUT as my first preference because its law school had such a good reputation, particularly for practical learning.

“I was involved with the Oodgeroo Unit (QUT’s Indigenous support unit) throughout my degree – I worked as an Oodgeroo student ambassador, and as an engagement officer and a tutor.”

Halfway through his university studies, Mr Murgha and his partner’s first son was also born.

“It was pretty daunting thinking about how we would balance everything beforehand, but you just learn how to do it on the go and it all worked out,” he said.

“I was lucky enough to have my partner Sonjah here to support me. She has a law degree too (from JCU in Townsville) and understood when I needed to study.”

Mr Murgha did several paid internships during his QUT law degree, including with Legal Aid Queensland and the Aboriginal and Torres Strait Islander Legal Service.

“I also worked for a Cairns law firm after graduating, so I really felt like I had gained quite a bit of on-the-job experience by the time I started by current role,” he said.

Mr Murgha was a member of the largest cohort of Indigenous students to ever graduate from the QUT School of Law – eight First Nations students who graduated in 2020.

He followed his degree with more study in 2021 to complete his Graduate Diploma in Legal Practice, which is a requirement for admission to the legal profession.

He then followed up with more study in 2021 to complete his Graduate Diploma in Legal Practice, which is a requirement for admission to the legal profession.

“All the work has been worth it,” he said.

“My education will allow me to build a stable life for my family and myself.  I want to affect change and achieve positive outcomes for our people and these qualifications will give me the foundation to do that.

“I decided to study law because growing up, coming from an Aboriginal community, it’s not something that’s really expected of you.

“I just wanted to step out of my comfort zone and show people from my community that we can go and do things if we really want to do it.  We don’t need to rely on anybody else’s opinion, and don’t let anyone hold us back.”