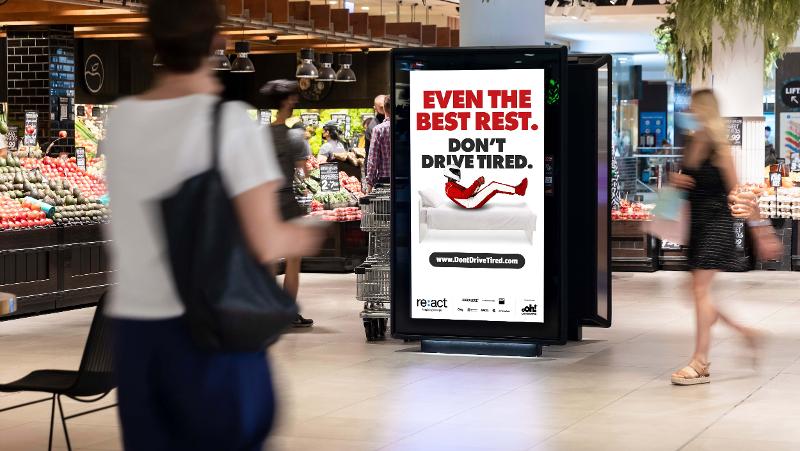 A road safety campaign created by QUT advertising students on the dangers of driving while fatigued will be seen across Queensland to help spread the message that getting behind the wheel tired is a risky choice a driver can choose not to take.

The ‘Even The Best Rest’ campaign features a racing car driver and was developed by Isobel Dembrey-West, Campbell Glaves, Saskia Harper, Austin Harvey, Alexander Sartori and Laura Tran.  Described by program partners as intelligent and inspired, it was selected as the 2021 Queensland campaign for the national Re:act road safety behaviour change program.

Re:act challenges local university students to create a campaign that raises awareness among 18 to 25 year-old road users of a critical road safety issue. Now in its sixth year, the brief for 2021 was to focus on the risks of driving fatigued.

The ‘Even The Best Rest’ campaign will be featured across Re:act media partner oOh!media’s extensive network of assets including university campus, retail, street furniture and roadside billboards in Queensland.

Professor Gayle Kerr from the QUT Business School said 68 third-year students participated in Re:act as part of their assessment for their final capstone unit, Advertising Campaigns.

“Driving tired is a real issue for younger drivers and one that our students can relate to. I know participating in this campaign has really made them think about their own driving habits,” Professor Kerr said.

“The selected campaign moves away from the shock or fear angles often seen in road safety advertising. Instead, it humanises that we all need sleep to perform at our best, whether driving or something else.

“For the students, it’s also an exciting opportunity to get some ‘real world’ experience and have their work seen by tens of thousands of people.”

Saskia Harper said the ‘Even The Best Rest’ idea was inspired by research she and her fellow students undertook that showed young drivers considered driving fatigued as normal and that humorous and authentic road safety campaigns were more effective.

“Our target audience are aware of the dangers of driving fatigued but feel they have no choice, and they prioritise their lifestyle over their safety,” said Saskia, who has just completed a Bachelor of Communication, majoring in advertising and public relations.

“The research also showed they believe they are capable of managing their tiredness while they drive, that they compare themselves to influencers, professionals and celebrities, and they are tired of road safety campaigns that use fear, so we wanted something humorous and authentic.

“That led to the idea of ‘Even The Best Rest’, which revolves around experts in their field, and the first figure we looked at was a racing car driver because they’re obviously linked to driving, so that gave the target audience a clear link to our message about not driving tired.

“Participating in Re:act has 100 per cent changed my behaviour. Just the other day I woke up feeling very tired. I had to go somewhere with my friend, and I asked my mum if she could drive us. Previously I would have just driven.”

“With those at the top of their game often put on a pedestal, it’s a very intelligent approach to reinforce that even the best in the world still need sleep to perform at their best,” he said.

“I look forward to seeing the QUT campaign joining selected Re:act campaigns in other states as the Re:act program goes live nationally in coming weeks.”

Partners in the program included Telstra, RACQ, Transurban, QUT’s CARRS-Q and the Queensland Department of Transport and Main Roads, representatives of which joined Re:act founder Andrew Hardwick in providing guidance to the students before later judging their efforts.