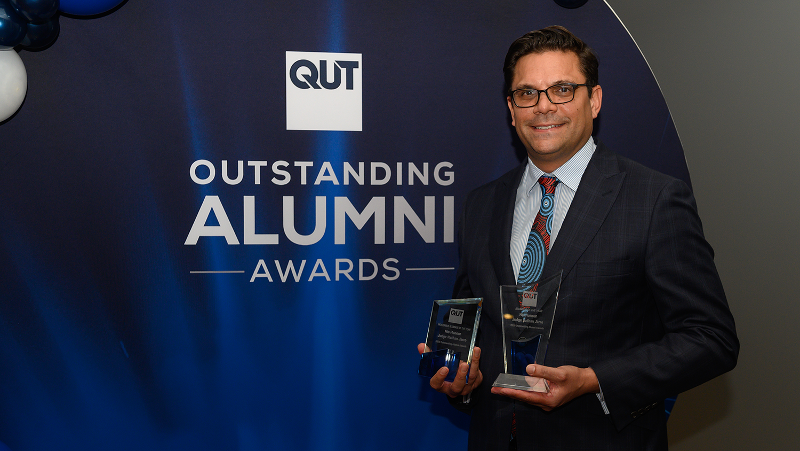 His Honour Judge Nathan Jarro is an Indigenous barrister who made history as Queensland’s first Indigenous judge when he was appointed to the District Court of Queensland in 2018.

His Honour Judge Jarro is only one of three Indigenous judges currently presiding over an Australian courtroom – an important step for First Nations people – and has been a member of the Queensland Bar’s Indigenous Barristers Committee since 2012. He identifies as Ghangulu on his father’s side, with connections to Bidjara on his mother’s side.

His Honour Judge Jarro received his Bachelor of Laws from QUT in 2000 and was admitted to the Bar in 2004. Since then, his Honour Judge Jarro has made significant contributions to the legal industry. His contribution to industry includes 14 years of practise as a barrister prior to his appointment to the District Court of Queensland. During his time as a barrister, his Honour Judge Jarro was appointed as a legal member of the Queensland Civil and Administration Tribunal (QCAT). He held this appointment since the inception of QCAT in December 2009 and has presided predominantly in the minor civil disputes and human rights division of QCAT.

His Honour Judge Jarro acted as a part-time member of the Aboriginal Land Tribunal in 2015. The Tribunal’s statutory functions include the conducting of inquiries, reviews and mediations, and arbitral and administrative decision-making responsibilities. The Tribunal also assists various parties with native title applications and Indigenous Land Use Agreements.

Christoper Emzin, Director of Indigenous Engagement at QUT Faculty of Law, has known His Honour since his early legal career following his graduation from QUT.

“His Honour has demonstrated high level representation for the Indigenous community in the various roles he has undertaken, and in his ongoing role as a member of the Indigenous Issues Committee for the Bar Association of Queensland,” he said.

“As a member of the Bar Association of Queensland over this time, I have witnessed firsthand the impact His Honour has made as a prominent Indigenous leader for the Queensland legal profession.”

His Honour Judge Jarro has given back to the QUT community as an Indigenous Representative on the QUT Council from 2008-2012. From 2014 until 2018, his Honour Judge Jarro served as Chair of QUT’s Indigenous Education and Employment Consultative Committee. From 2018, he has continued his association with QUT as part of the Faculty of Law’s Advisory Group.

His Honour Judge Jarro’s contributions to the legal profession and his community demonstrate commitment, ambition and integrity. He is a role model for other young practising and aspiring Indigenous lawyers. He has demonstrated core values congruent to those of QUT throughout his career and in his commitment to the university, Indigenous and wider communities.

The annual QUT Outstanding Alumni Awards recognise outstanding graduates of the university, and its predecessor institutions, who have displayed exceptional professional, academic or research achievements and contributions to the community