A QUT creative writing graduate now working on a novel about Aboriginal relationships with megafauna has been shortlisted for the prestigious $50,000 2015 Stella Prize for outstanding Australian women writers.

Ellen van Neerven, 24, was nominated for her first book, Heat and Light, a collection of stories inspired by Indigenous experience which in 2013 won her the Unpublished Indigenous Writer/David Unaipon Award.

Published by UQP in 2014, Heat and Light gives a contemporary spin to traditional stories beautifully crafted in three distinct yet linked parts.

Ms van Neerven graduated from QUT's Creative Industries Faculty with a Bachelor of Fine Arts in 2010 and has since been employed as a senior editor for black&write!, the State Library of Queensland's Indigenous Writing and Editing Project.

A former student of Albany Creek High School who now lives in Teneriffe, her heritage is Mununjali through her mother and Dutch from her father.

In 2014, she was awarded a Queensland Writers Fellowship from the Queensland Literary Awards for her new work of fiction, Days of Extinction, which explores the relationship between human civilization (past and present) and the land.

"The critical acclaim I have received for Heat and Light has boosted my confidence and ambition as an author and allowed me to devote myself to getting my next project off the ground," Ms van Neerven said.

"Days of Extinction is a novel that involves a lot of research. It is amazing how much we don't know about megafauna in Australia or even recent extinctions," Ms van Neerven said.

"I am also concerned about the animals we will lose in the next 50 to 100 years. When you look at the past it is a glimpse into the future.

"I wanted to write about the Aboriginal relationship with megafauna and what happens when we lose wildlife but have some fun with the subject too."

Ms van Neerven said she was overwhelmed to be nominated for the Stella Prize.

"I still can't believe it and I have noticed there are other first-timers on the shortlist so it is nice to see a balance between well-known writers and those who are up and coming," she said.

Ms van Neerven credits QUT for giving her the skills to pursue a career as a writer.

"The Oodgeroo Unit at QUT was incredibly supportive and I met so many people through my involvement with it so I never felt like I was alone," she said.

The 2015 Stella Prize winner will be announced on April 21. 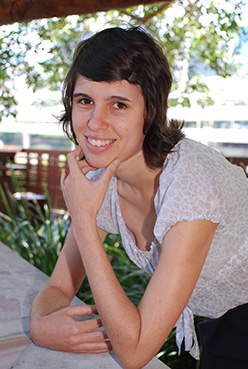