A novel about a crime-solving courtesan set in 1860s London written by a QUT Creative Industries academic and PhD candidate has been snapped up by UK publishing company Legend Press.

She Be Damned is the debut novel of Mirandi Riwoe and will be published next year under her pen name M.J. Tjia. Written for her PhD in Creative Writing and Literary Studies, it was long-listed for the 2015 CWA Debut Dagger prize.

A new entry into the historical fiction genre, the book’s protagonist is Heloise Chancey, a famous courtesan who investigates the disappearance of prostitutes in the Waterloo area. A follow up has been commissioned for 2018 and Ms Riwoe is hoping it is the start of a successful series.

“I never really believed this could happen. It is such an amazing opportunity to launch my writing career,” Ms Riwoe said.

“It is very affirming and I feel that I have been greatly inspired by being in the same space here at QUT as an enormously talented group of creative writers. Being in such company makes you want to lift yourself to their level.”

Ms Riwoe is the daughter of a Chinese/Indonesian father and Irish/English/Australia mother and said although She Be Damned is set in London; the novel has some serious Asian themes as well.

“Many crime novels have featured a ‘sinister Asian’ figure so my book explores that through the story of Heloise’s maid, Amah Li Leen, a Eurasian. Some of the novel is told in her voice and covers her tragic background in Makassar,” she said.

Ms Riwoe is inspired by crime writers including Agatha Christie and Val McDermid. She also admires Australian author Kerry Greenwood’s Phryne Fisher novels, and can only hope Heloise receives such a great reception.

“I am just finishing my PhD and will then get cracking on the second book in what I hope will be a long-running series on the adventures and exploits of Heloise Chancey,” she said. 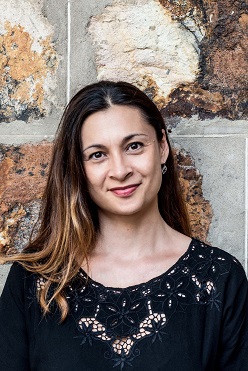