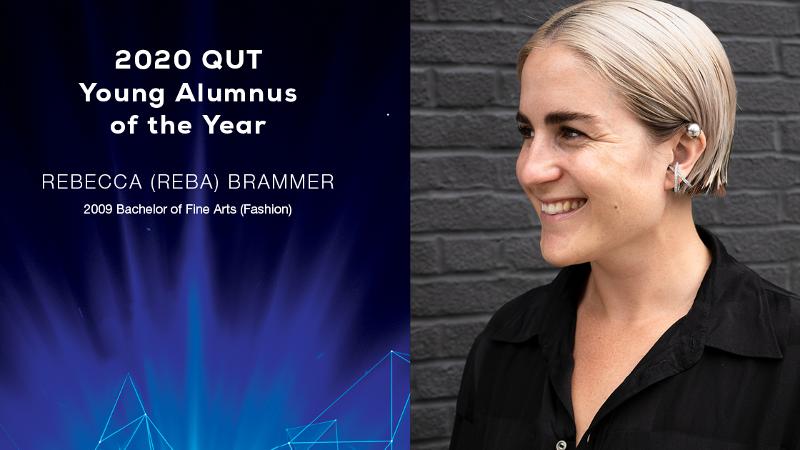 QUT Creative Industries graduate and innovative shoe designer Reba Brammer has been named the QUT Young Alumnus of the Year for her incredible career trajectory within the space of a decade.

Hailing from the regional area of Toowoomba, Reba’s professional life showcases a fast-growing and organic strategy grounded in resilience and self-belief. After graduating from QUT, Reba’s outstanding talent and networking skills allowed her to work first in Sydney, then overseas in Paris, interning in a small bespoke shoe studio and working for renowned designer Robert Clergerie. Working in Paris Fashion Week with fashion veteran Florence Deschamps helped her develop an acute eye for the international industry.

London then beckoned, where Reba secured a coveted design role with Robert Storey, connecting with brands like Wallpaper and later designing for the internationally acclaimed shoe brand Jimmy Choo. Then in 2015, one phone call changed her life, setting her up for her most significant career move to date – the opportunity to design for Nike in the USA.

Fast forward to 2020, Reba resides in New York, fulfilling her ‘Just Do It’ dream career as a shoe designer. As part of the organisation’s collective design team, her focus is on leading highly innovative creative collaborations between Nike and renowned international design houses.

Dean Brough, Director of Studies within the QUT Creative Industries Faculty, said he had the privilege to see Reba's formative years of her design aesthetic evolve during her undergraduate studies.

“The footwear industry is arguably one of the hardest fields in the apparel sector to establish a career, and to see Reba gain international acclaim, working at Nike in innovation and collaboration leadership role, is a credit to her unwavering determination,” he said.

“I look forward to seeing the next decade unfold for Reba’s design career, as she represents the best of QUT ethos for making impactful difference.”

In this year’s incredibly complex social climate, some may see shoe design as light in impact. However, this is far from reality, as Reba’s design innovations and associated collaborations support Nike’s commitment to social and community engagement through the Nike Community Impact Fund. The Fund supports grassroots organisations in the United States and across Europe to encourage and empower young people to get moving in their local communities through sports and physical activity.

Through Reba’s position of influence at Nike for shoe innovation and design collaborations, she has been a role model for the next generation of QUT Design graduates. In particular, Reba continues to inspire female designers, keen to make their mark internationally in a hyper-competitive and often male-dominated industry.

Each winner and their achievements will be celebrated at the Outstanding Alumni Awards dinner on October 12 at Room Three-Sixty at QUT Gardens Point campus. The QUT Outstanding Alumnus of the Year will also be announced at the event.