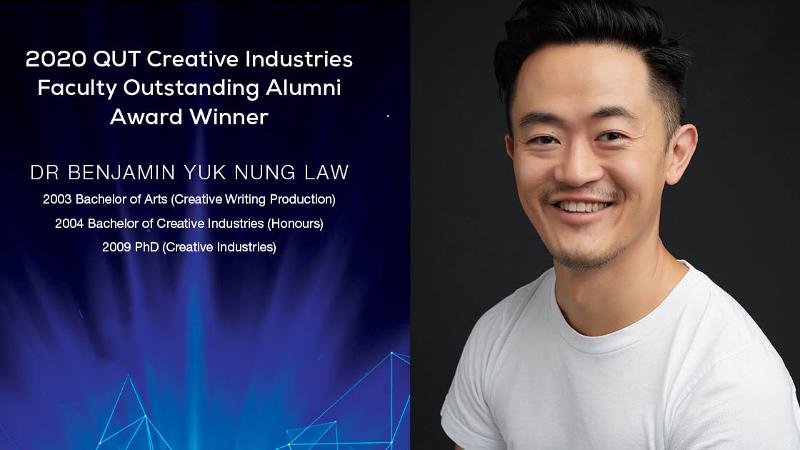 One of Australia’s leading creative writers and public commentators on diversity and representation in the media has been named the QUT Creative Industries Faculty Outstanding Alumni Award winner.

Dr Benjamin Law has built a successful creative writing career drawing on his own personal experiences growing up in Queensland to immigrant parents from Hong Kong via China and Maylasia.

Benjamin began studying creative writing at QUT in 2000 and went on to complete a PhD from QUT in television writing and cultural studies. His research focus was on the representation of Asian-Australians in television. This critical and creative concern has since formed key parts of his professional practice and impact in the wider community.

Professor Helen Klaebe PFHEA, QUT's Pro Vice-Chancellor for Graduate Research and Development, has known Benjamin for 20 years since their time as tutors and sessional teaching colleagues at QUT.

"Since graduating from QUT in 2004, Benjamin commenced what has become a very successful independent freelance career,” she said.

“Benjamin’s career is not only diverse, but also impactful – professionally and in our community, using his strong social media following to influence society more broadly.”

Benjamin’s writing career is bound with his personal experiences and the desire to make positive change. His writing is centrally concerned with the stories of people who are underrepresented or marginalised in our community. He uses the role of storytelling in its many different forms as a way of highlighting diversity of experiences.

His debut book, The Family Law (2010), is a memoir and linked series of tales about family life and Asian identity in Australia. His memoir became even more successful when Benjamin adapted it into an SBS TV series (2016-2019). The Family Law series has been sold in over 70 territories, received countless nominations and won many awards, including Best Comedy Series at the Asian Television Awards. In addition to this critical and commercial success, The Family Law has had an enormous social impact by highlighting the lived experiences of Asian-Australians and promoting culturally diverse voices and representation in Australian media. Other notable books and publications he has authored include Gaysia: Adventures in the Queer East (2012), the Quarterly Essay Moral Panic 101 (2017) and, as editor, Growing Up Queer in Australia (2019).

Last year, Benjamin was named one of the Asian-Australian Leadership Summit’s (AALS) 40 Under 40 Most Influential Asian-Australians (winning the Arts, Culture & Sport category) and one of Harper’s Bazaar’s Visionary Men.

Throughout his career to date, Benjamin has also been able to express these concerns in a wide range of leadership activities for his profession and an impressive depth of community service. These acts of giving back are also reflective of the variety of his writing practice across film and television, journalism, creative nonfiction writing, and commentary.

Each winner and their achievements will be celebrated at the Outstanding Alumni Awards dinner on October 12 at Room Three-Sixty at QUT Gardens Point campus. The QUT Outstanding Alumnus of the Year will also be announced at the event.