A QUT team has secured $100,000 worth of in-kind funding for a plan to help double global food production by unlocking the potential of duckweed.

Team Exatio, made up of QUT post-graduate students, finished second out of the six international finalists in the 2015 Global Business Challenge and also won the Wiley Genesis Prize.

Provided by leading Australasian food facilities design and engineering company Wiley, the prize secures the team $100,000 in-kind of professional support to assist in taking their idea to the next stage.

Coached by Kerrie Muir, the team of Siona Hardy, David Martin, Luke Swetman and Nicholas Rogers devised an innovative strategy to harvest the aquatic plant Lemna, commonly known as duckweed, as an alternative plant-based protein solution for feedstock for animals.

"Our challenge was to design a business solution to help the world double food production by 2040 and we believe duckweed could be the key," team member David Martin, who is studying a Master of Business Administration (MBA), said.

"Duckweed is rich in proteins and duplicates every two to three days so it really is an incredible plant which could have significant implications for world food supply."

"We were incredibly impressed by all of the teams who pitched their ideas, but the QUT entry really stood out for its innovative approach in processing," he said.

"We look forward to collaborating with the team to help bring their idea to life."

The 2015 Global Business Challenge was won by team Fish 4 Africa, from the University of Cape Town, which developed a plan for efficient breeding and processing of catfish in Africa. 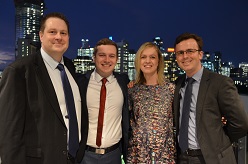