Ms Burns, from QUT's Business Faculty, said the rise in patients taking their own medical selfies and tracking and documenting their health with devices like Fitbits was changing the doctor/patient relationship.

"I am interested in how this affects clinical care and am researching a number of issues this new patient dynamic is creating such as whether patients prefer to take their own photos or have their doctors take them," Ms Burns said.

"Also I'm looking at whether they should be taken on a dedicated camera or a smartphone."

Ms Burns said her interest was piqued while working in hospital photography when she noticed that doctors and nurses were taking clinical images on their smartphones.

"I did my honours research into the privacy and consent issues surrounding this phenomenon," she said.

Ms Burns said medical selfies would become much more common as word got out how they could help people describe their symptoms to doctors.

"A woman who videoed her stroke symptoms was able to get treatment after she showed doctors the vision of her slurred speech and facial paralysis. On her first visit to the doctor medical testing hadn't confirmed a stroke," she said.

"Another issue I will address is whether people taking their own photos could improve the communication with their doctor.

"Current research suggests medical selfies could help with agenda setting during consultations and that patients may be more likely to keep up treatment plans."

She said medical selfies had the potential to help people change their behaviour to more healthy habits.

"The medical selfie is all part of the participatory medicine revolution and will affect practically everyone who sees a doctor.

"In my research, it might be a diabetic who discovers a foot wound and sends a picture to their doctor.

"This act could be the critical factor in deciding how serious the wound is and whether it requires immediate treatment.

"In other people it might just be the satisfaction of knowing they have a correct diagnosis, if the symptoms aren't present in the consultation.

"On a broader level it's about trying to shift away from fixing diseases and moving towards preventing them by engaging the patient through self-monitoring technology. It's about discovering issues before they become a problem."

Ms Burns is seeking patients, doctors and carers to participate in her research.

"I would like people who have or are experiencing a condition that could benefit from 'medical selfies' to participate in this study," she said.

"This includes conditions such as a wound, a rash or a significant number of moles. The only other criterion is that participants have taken one photograph on a smart phone in the past year."

Ms Burns is also looking for medical practitioners and carers who look after people with these types of conditions. 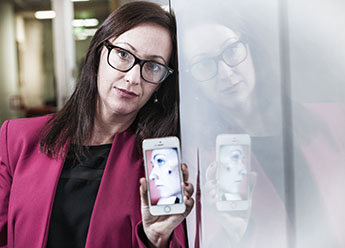