Australians shoplifted $7.5 billion worth of goods in the past financial year, but a Queensland University of Technology (QUT) researcher said the actual cost was much higher.

He said the value of goods shoplifted had risen steady since 2007 when $4 billion worth of goods were stolen.

"Shoplifting is literally costing Australians billions as both the cost of lost goods and the cost of counter theft measures are generally passed on to consumers," Dr Mortimer said.

"Many stores have now labelled goods covertly with alarms so they are activated as a shoplifter goes through an electronic radio frequency gate on their way out of the store.

"More security cameras have been installed in shopping aisles, too, but the biggest cost is the employment of what are called loss prevention officers, staff who walk around the store spotting potential shoplifters."

Dr Mortimer said other hidden costs included loss of sales and the time it takes staff to prepare paperwork associated with shoplifting as well as increased insurance premiums.

He said there was no specific profile for a shoplifter.

"Shoplifters come in all shapes, sizes and ages, from school children to the elderly," he said.

"Shoplifters are motivated by a range of things from the opportunist who walks out of a store with an item because a counter is unattended, to kids who shoplift as a dare to the habitual shoplifter who steals probably each week.

"Then there are the professional gangs at work who steal large volumes of goods and sell them interstate, on ebay or at markets."

"As the cost of living increases some people feel they need to steal to put food on the table and petrol in the tank," he said. 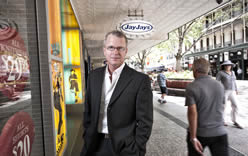